There are three lead systems that make up the standard ECG:

The Standard Limb Leads are used to display a graph of the potential difference recorded between two limbs at a time, ergo, they are bipolar. In these leads, one limb carries a positive electrode and the other limb, a negative one. 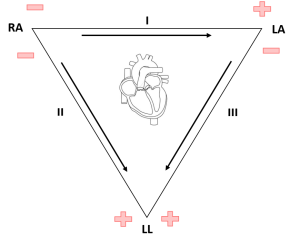 Using these measurements with Einthoven’s Law you get

So these leads are electrically equilateral.

The Augmented Limb Leads obtain a graph of the electrical forces as recorded from one limb at a time using a null point with a relative zero potential, thus, they are unipolar.

These leads, aVR, aVL and aVF give additional views on a trace by reading potential difference across the heart in three more directions on the frontal plane.

The Right Leg (RL) electrode removes artefact from the ECG and is not a directly participating factor in the visible trace.

The Precordial Leads, or Chest Leads are labelled V1- V6 and are placed on the sternum travelling in a posterior direction:

This direction creates a transverse plane via which to view the heart’s electrical signal, in addition to the frontal plane offered by the Limb Leads.

Lead Groupings or Contiguous Leads are categories of leads based on the area of the heart they examine:

Polarisation dictates the direction of the trace on the ECG.

To graphically represent the electrical forces in Einthoven’s Triangle, we can draw them in such a way that they bisect each other, passing through a common central point. 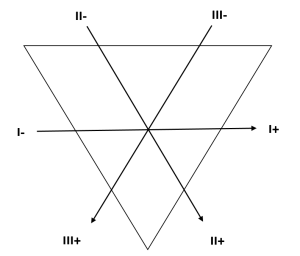 Each axis is separated by 60° from each other, with the lead polarity , + or -, remaining in the same direction. This is known as the Triaxial Reference System.

By combining this triaxial lead system with one from the Unipolar Limb leads (also with 60° separation), we create the Hexaxial Reference System, used to determine the electrical axis of the heart.

Don’t worry about the colours yet. They will become clear when we determine the cardiac axis.

11 thoughts on “The ECG Leads, Polarity and Einthoven’s Triangle”