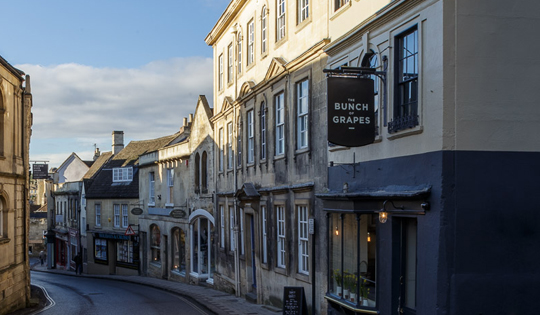 I (probably) know exactly what you’re thinking; “why is a a cardiology website reviewing a restaurant?”

The reasons are three-fold: firstly, before I began this career, I was a professional chef, and as such, I know my way around food and kitchens. Secondly, The Bunch of Grapes features a menu developed in part by Ali Khavandi, the man behind Cardiologist’s Kitchen, and finally, I was invited to an evening hosted by Ali himself and project manager Mary, and we ate some of the food, so it seemed entirely appropriate.

I’ve always had a lot of love for Bradford on Avon. It looks like the generic description of a town in this country that you’d receive if you were to ask an American to describe “England-but-not-Central-London” – picturesque, quaint, cobbled, Downton Abbey, etcetera. Its subtle gentrification has given rise to a few more shops with the word “craft” in the name, but it isn’t a detriment to the town, and I didn’t see pulled pork on any menu as I wandered around. In fact, this shift has kick-started the local economy, and allowed middle-to-high end gastropubs like The Bunch of Grapes to open.

The eatery sits at the end of a terraced row, and looks rather unassuming from the outside. Once through the doors, however, oak furniture leads you past the deceptively wide casual dining/drinking area, and into the bar.

Now, if you’ve ever been to an establishment that serves both Butcombe Bitter and duck confit (read: gastropub), you’ll know two things are an absolute certainty:

1) Refreshments are the usual fayre, encompassing local ciders, lagers, ales and fancy-looking soft drinks (if you’ve ever tasted an “artisanal” cola, you’ll be well aware that they’re not bad, but they aren’t normally any better than the usual suspects). There isn’t a huge selection of each, but all are reasonably priced and work well with the surroundings and menu.

2) The bar area is found before the more formal dining room, which features smaller, more intimate tables and is far enough away that one can avoid the loud, busy Friday and Saturday evening drinkers.

Both of these things are true here, but The Bunch of Grapes still has a certain individuality to it.

The restaurant offers two main types of menu, one that presents as a kind of upmarket but classic pub food list, and another, more refined selection that seemingly draws more influence from French cuisine. There exists a third nestled in amongst them, however: the CardioKit menu. Consultant Interventional Cardiologist, Ali Khavandi and head chef Steve Carss have joined forces to create a professionally cooked, heart-healthy range of dishes for patrons. Dishes which I was invited to sample. 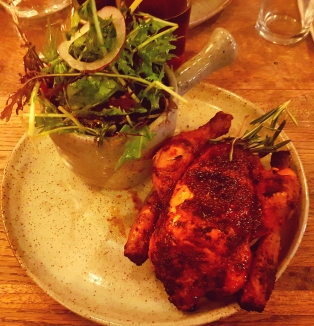 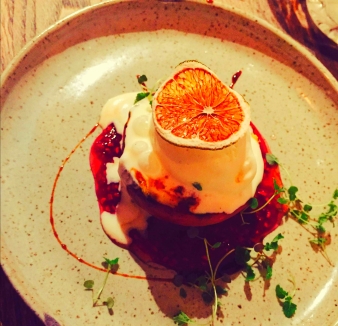 First up, the whole roast poussin. It arrived on a heavy, ceramic plate (not a wooden board, thank heavens), and despite having a rather downplayed menu description, was something of a delight! Liberally doused in apple and wholegrain mustard during cooking, and stuffed with whole sprigs of rosemary, the slow roasting process meant that not only was it incredibly tender, but the flavour of both the baste and the rosemary permeated through the wonderfully textured skin and the soft meat. The accompanying mixed leaves and ash roasted leeks were a more underwhelming by comparison, but they weren’t a bad thing by any stretch. Besides which, they were never really going to be the star of the dish. Both elements combined didn’t quite sate my hunger as I wished, and could have done with a starch to accompany them, but it didn’t detract from what was there.

Whole chicken picked clean, dessert was served, and it was another knockout. Indulgence and healthy don’t usually go together when dining out, so it was a refreshing change to be presented with just that. A sweet, roasted half peach served on a just-bitter-enough berry compote. On top of that was a big scoop of vanilla ice cream and a smattering of cress, because healthy eating is boring without something that feels a lot naughtier than it actually is.

In all honesty, it’s just nice to eat a dessert in a gastropub that isn’t cheesecake, or something that’s been baked in the same ceramic bowl that you eat it from. The peach had a lovely crunch to it, and given that the rest of the dish effectively existed as a cold sauce, it summed up both courses; this was an exploration of textures as much as it was of healthy flavours.

I didn’t know what to expect from the CardioKit menu items, to be completely truthful, as I doubted how versatile it was possible to be to justify charging restaurant prices for healthy food, but I was (and still am) happy to be proved misguided. I worked in kitchens that revelled in being an unhealthy treat, but I almost find myself regretting not having brought something like this to customers myself. As a result, I’ll be championing The Bunch of Grapes and Cardiologist’s Kitchen, and I’ll be back to taste the rest of the menu.

Oh, and CardioKit patients get 50% off their food, so there’s no excuse for those in the South West not to visit.

For more information abut both The Bunch of Grapes and Cardiologist’s Kitchen, visit their websites: 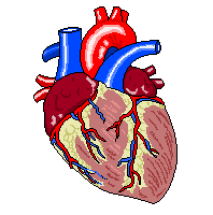