I had the rather marvellous opportunity today; spending a day in cardiac theatres and, under the guidance and tutelage of two cardiac surgeons and an anaesthetist, learning the processes and methodologies behind CABG and MV repair.

I arrived at the Bristol Royal Infirmary surgical centre at 7:45am and was quickly changed into some scrubs and inducted into the OR’s team: three surgeons, two anaesthetists, one perfusionist and a selection of nurses both scrub, and regular. It was clear to me that each of these individuals knew one another well, just by the way they talked to each other; everyone seemed at ease with the rest of their colleagues. It turns out, I was right. Many of them knew each other from other hospitals, university or simply having been mentored by each other during training. This camaraderie bled into the surgery, as each team member knew not only their role, but that of the others, also, so equipment was passed over or set up without being requested, making for a seamless procedure.

The patient was, until the last year or so, a very fit and active 79y/o, who had suffered from AF for at least 10 years, and had developed a stenosed left anterior descending coronary artery as a result. In addition, echo had shown a severe mitral regurgitation due to valvular prolapse. The procedure would attempt to bypass the LAD using the left internal mammary artery (LIMA), as shown below.

The plan was to perform the bypass graft, and then set about repairing the damaged mitral valve.

After the patient’s ID and contraindicators had been checked, the anaethetists set about carefully monitoring their respiratory and cardiovascular function as the GA took effect. The ECG, arterial and venous pressure traces were available on lots of screens around the rooms, as whilst they must be monitored all of the time, it becomes particularly important to keep an eye on the given values as the heart is both stopped and re-started.

Interestingly, I noticed a pattern in conversation with each patient throughout the day, as the anaesthetic was administered. The patient was asked to think of their favourite place and the team then asked where that place was. Each time, this was met with silence, but just to make sure, the patient was always asked if they were warm enough. When no answer was forthcoming, they were wheeled into the theatre room proper.

Not everyone on the team was scrubbed up and sterilised, as obviously some would not be required to touch the patient, and others would be required to fetch replacement equipment should it be needed. This created a “sterile field” around the operating table, so only sterile members of staff were permitted within it.

After 1 hour and a whole heap of sterile gowns and drapes were applied over the patient, with only a small window showing the surgical site, the operation began.

Step 1 required access to the thoracic cavity. In case of blood splatter, masks fitted with facial protection were supplied to myself and the other team members who would be in the direct vicinity of the patient when the chest was opened.

An incision was made as illustrated below. This is known as a median sternotomy, and extends from the sternal notch to the xyphoid process. In order to progress past the sternum, an oscillating saw is used to cut throught it. There is a surprising amount of finesse involved in this stage, despite how much pressure is required and as a result, how brutal it appears. 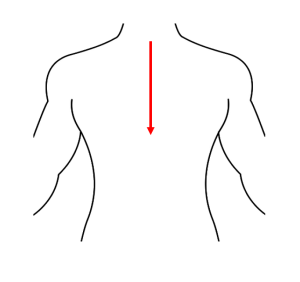 The incision is deepened and cauterised until it travels through the pericardium, so as to allow access to the heart and, after the bleeding vessels around the wound are cauterised, a finochietto retractor is used to hold the sternum open. During this time, the LIMA is found and carefully removed from the chest wall. It is then held in an accessible place with forceps, to be used later. 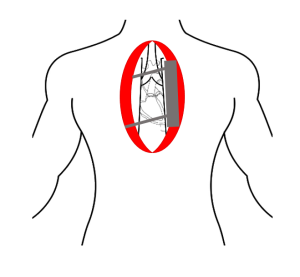 Lung and cardiac function is transfered to a cardiopulmonary bypass machine, which allows both the heart and lungs to be stopped/emptied, allowing even greater access to the heart due to the lack of lung obstruction, and intricate work to be perfomed whilst the heart is not beating. 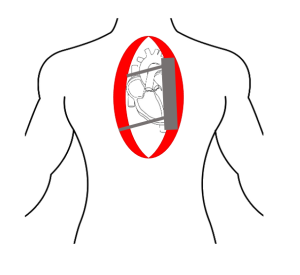 The cardiopulmonary bypass apparatus purifies the blood that passes through it from the patient via cannulas placed in the heart and pumps it back, thereby doing the work of the heart and lungs. The heart is fed nutrients at the same time, so as to keep it healthy for the extended period of inactivity. This method of on-pump surgery is known to be incredibly safe- between 1 and 2% of high risk patients will suffer adverse effects as a result of the treatment, and surgical teams are well versed in assessing this via risk factors.

Once the LAD has been correctly identified, an incision is made, creating an opening that roughly matches the size of the end of the LIMA, and the two are stitched together using sutures made of polypropylene,which are no thicker than a human hair, yet can withstand the pressure that would be required to rupture a healthy vessel. To test the suture site, blood is passed through the vessel, and in the event of any gaps in the connection, this blood will be seen outside of the join, which can then be further secured as necessary.

The process, whilst quick to document, was a long one, as each step of the technique was scrutinised carefully before considered complete. In addition, each stitch required at least two people directly, to exact it; one to add the suture, and the rest to support the structures surrounding it.

The second stage of this case was the mitral valve repair, which was in itself a multi-stepped procedure. It is possible to repair a damaged mitral valve using less invasive, keyhole methods, but due to the need for a bypass graft, this wasn’t an option this time.

After gaining access to the valve itself, via an incision in the left atrium, the condition of the valve leaflets is assessed. This particular patient’s posterior leaflet had a prolapsing middle scallop, which meant that the below procedure was necessary to repair it.

The process off attaching the ring was a long one, involving a lot of organisation and intricate knotting. The sutures are applied to both the ring and the valve, the latter is then gently pushed down the threads and into place. These suture strings are then tied off and cut.

When performing the annuloplasty removed the surplus anterior leaflet, it took with it a tendineae chordeae, so in order to stabilise it further, an artificial heart string (made of Gore-Tex) was attached to the leaflet and papillary muscle.

A final transesophageal echo was performed, to assess the level of air still present in the heart, and to then assess the function of the repaired mitral valve, and after all of this was successfully accomplished, the long task to gently remove all of the cannulas that were used to bypass the cardiopulmonary system were begun to be removed. Each chamber was sutured in sequence, and the corresponding section of the perfusion apparatus turned off. All of this time, the anaesthetist monitored the patient’s drug infusions and every member of the team monitored pressure and ECG traces. This was still going on whilst the SpR set about cauterising vessels and wiring the sternum before pulling it back together. None of this section of the procedure involved any real finesse; pulling the wires taut so as to close the chest cavity is a test of strength. Each pull caused the patient to move for the first time since coming into the theatre, so I guess that was why it was the only section of the surgery that almost made me wince (something the theatre lead noticed and laughed about). Once it was done, the multiple layers of sutures were applied to seal the surface wound and the patient was taken to recovery.

In all honesty, the most difficult part for me, was in standing for so long. This was echoed by the surgeons, who said that they always felt backed up by their colleagues, so they felt confident that the procedure itself would go well, but standing, often in an unnatural position for so six hours at a time played havoc with their backs and legs. The anaesthetists, being required fully at the beginning and the end of the surgery, spent a great deal of time sat waiting, save for occasionally changing an infusion as and when required. The people working solidly were the surgeons and the scrub nurse, but even the surgeons swapped roles, observed one another without participating, and even took breaks periodically. None of this diminishes any one role, however; each member of the team was required, be it constantly or otherwise, and when one was needed, it took a single word for everyone in the room to know what was required, and by whom. Despite the procedure itself being amazing, it was the mechanical and seamless nature of the professionals in the room that was the most astounding part of the day. 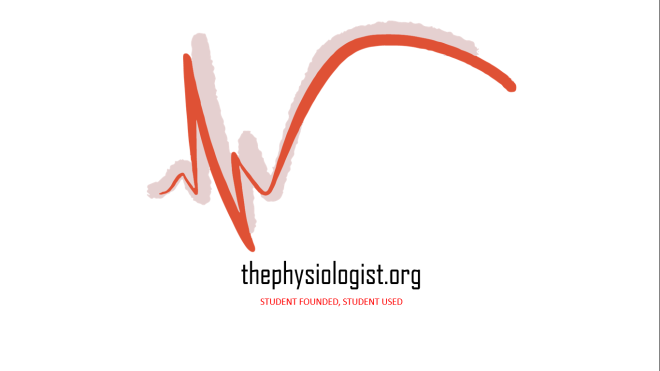